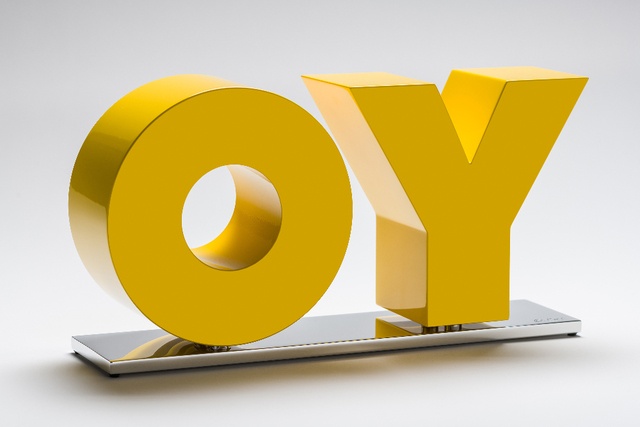 Deborah Kass is a multidisciplinary artist examining the interactions of politics, pop culture, art history, and identity within a Pop art sensibility. She is recognized for her paintings, prints, neon, sculpture, and installation rooted in her signature appropriation technique.

Her first major series, “Art History Paintings,” produced in the late 1980s, Kass commandeered celebrated post-war visual motifs and rerouted them to express a feminist narrative. She also appropriated works of famous male pop artists such as Andy Warhol or Jackson Pollock and infiltrated them with her own feminist identity. With this series, Kass established her trademark appropriation style — a critical commentary on the intersection of the historically dominant position of male artists in the art world.

Commissioned in 2015 for the Brooklyn Bridge Park, OY/YO is a large yellow aluminum sculpture installed on the waterfront and was visible from the Manhattan. It spells “YO” against the backdrop of Brooklyn. The flip side, for those gazing at Manhattan, reads “OY.” Since 2011, OY/YO has been a recurring motif in Deborah Kass’s work — she first created “OY” as a painting riffing on Edward Ruscha’s 1962 Pop canvas, “OOF.” She later painted “YO” as a diptych that nodded to Picasso’s 1901 self-portrait, “Yo Picasso.”.

Learn More About The Artist